Wondering what to do with your Red Russian Kale? You aren’t the only one! Here is an idea from your fellow customer Beth.

That sounds like it should be code for something.  I had never heard of it before until I got my box of fresh organic produce yesterday, from Space Girl Organics.  I had skimmed over the list already and made a few swaps, but I really didn’t know what I was pulling out of there when I saw what looked like scraggly kale, so I ran back to the box to read the label.  Red Russian Kale.  Ok, then.  It’s quite likely I’ve eaten it before and just didn’t know what variety I had.  My Mamaw used to open a can of chopped kale and heat it up as part of Sunday dinner, served with a splash of vinegar.  Bitter, but I grew to sort of appreciate it.

What the heck is Red Russian Kale? 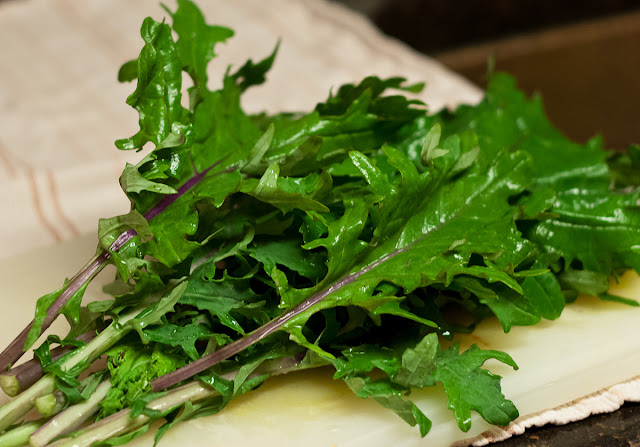 I knew I was going to cook some salmon filets that I’d had in the freezer and decided that I should go ahead and cook up this kale with it.  I happened to have some pancetta in the fridge (*cue deep male Spanish accented voice* I don’t always have pancetta in the fridge, but when I do, I do a happy dance) for a recipe I never got around to cooking (sorry, Mom!).  I originally planned on browning it and then sprinkling the crumbled bits over some skillet sweet potatoes, but I decided I would try it in the kale instead, and it came out muy delicioso!

So here you go:

Brown a couple ounces of pancetta (or bacon, or ham with some olive oil) in a skillet over medium heat, being careful not to burn it–but let it get crispy for crumbling.  You will use the browned bits stuck on the bottom and we’re not going for a charred flavor.  Remove the meat and allow to drain off any excess grease on a paper towel.  Roughly chop a bunch of kale, removing the tough stems, and place into the skillet with the rendered grease still inside.  It will cook fairly quickly, a huge bunch of kale will wilt into a rather small but tasty amount.  Once it is bright green and looking tender, just a few minutes, deglaze the skillet with about a Tbsp or two of vinegar…I used Balsamic this time since I was planning on using it on the salmon anyway.  Taste and add salt and pepper as needed.

Pancetta…yum.  Can’t go wrong with something that looks and tastes so much like bacon! 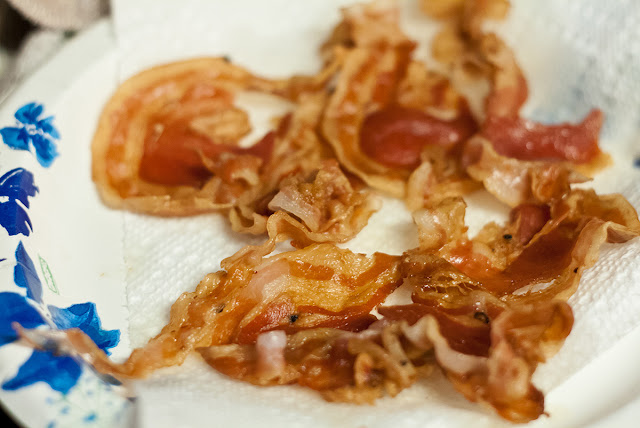 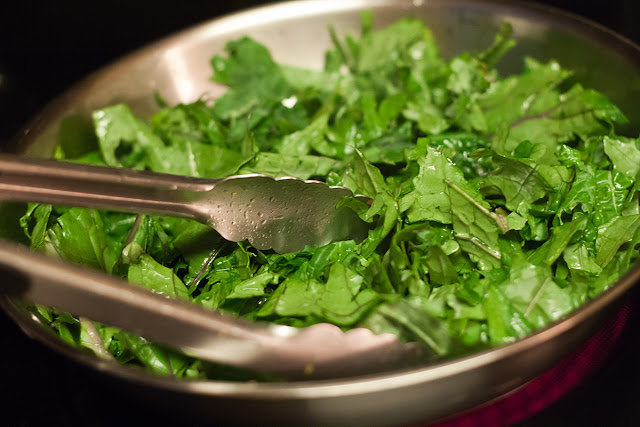 I used this kale as a bed for my salmon, tossing some halved grape tomatoes in at the very end (also from Lucinda! Woot!) and I sprinkled the pancetta bits over the salmon and finished it with a balsamic glaze.  It was very VERY tasty, although it was my first time reducing balsamic vinegar and I almost ended up with balsamic toffee.  Live and learn.

A food photographer I am not.  But it did taste good, I swear! 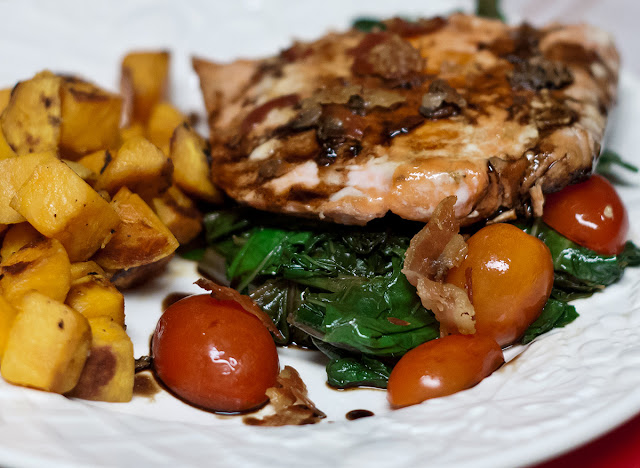 Oh yeah, I still did the skillet sweet potatoes, but they were a little sad to give up their pancetta friend 🙁  Next time, sweets, next time.