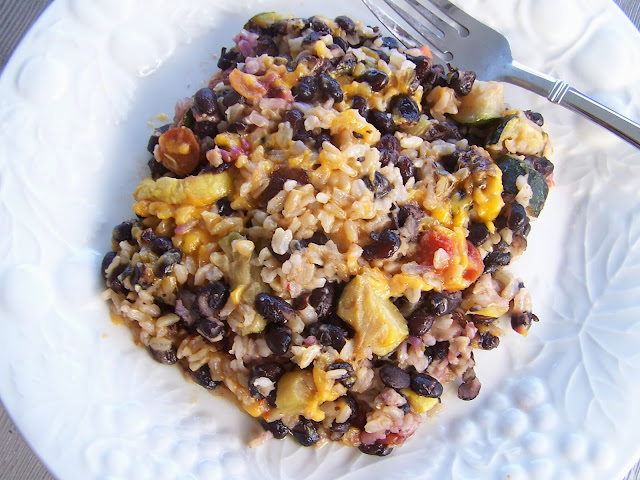 This week, Guest blogger Ali is teaming up with Space Girl Organics again and cooking for the kids at a local children’s home:

This week I received zucchini, carrots, yellow summer squash, jalapeno, onion, red potatoes, eggs, fruit and a new organic cornbread mix in my Space Girl Organics boxes.  I decided to roast a chicken, boil the red potatoes and make a big cheesy beans and rice casserole with lots of veggies in it.  I also made them lots of carrot sticks, a fruit salad with apples, pears, kiwi berries, pomegranate seeds and baked cornbread.  We’re cornbread fans at my house, but I need gluten free and non gmo, so we don’t get to indulge as much as we used to.
It was exciting when Space Girl Organics included this new organic cornbread mix in their donation for me to cook with.  One of the perks of cooking is that I get to snitch a piece or two!  I made it in my large cast iron skillet, that I heat in the oven with a little organic butter, before I pour in the batter.  I also added two tablespoons of organic cane sugar and an extra egg to the mix. It turned out great. The crust was crisp and the cornbread had a nice rise.  I would definitely make it again.  Thanks Space Girl Organics for the treat!

Makes one 9×13 casserole and one 8×8 casserole. Lightly grease pans with olive oil.

The day before I wash, sort and soak my black beans overnight.
The next day, drain the soaking water and put beans in a large pot with enough fresh water to cover. Simmer until tender.
While the beans are cooking, I cook my rice in the rice maker or you can cook it in a large covered pan on the stove.  Add 2 cups brown rice and 4 cups broth to your pan and cook rice until tender and the liquid is mostly absorbed.