Because of Lucinda… Award Winning Zach and Sage’s Mexi-touille

In this post, Beth writes about how her son won a blue ribbon for cooking at the county fair and shares their award winning recipe for Mexi-touille:

I don’t know when exactly my addiction to cooking shows started, but I do know when it started to click in my brain and make sense, especially the reason why my pancakes were always so bland and tough.  Alton Brown.  Sigh.  Hearts.  Music.  If you have never seen an episode of ‘Good Eats’, then you are truly missing out.  Alton is a cooking scientist and if you are a visual thinker like me, it is pure joy to SEE him explain the how and why of recipes and techniques.  And he is so entertaining, coming up with the corniest of visual aids and using people as molecules and a blue crab that keeps escaping the tank, haunting everyone on set…ahhh.  Zach would curl up next to me on the couch and we’d watch, enthralled, then jump up and cook something.  Let me tell you, I know how to make pancakes now.  No matter what recipe I use or what the directions say, I follow his technique and BAM! (sorry, Emeril) they are wonderful.

So Zach developed an interest in cooking, needless to say, forced into food tv watching with mama, and he’s pretty good at it.  Recently, he and a classmate decided to join the kids’ cooking competition at the county fair.  The concept was sort of like ‘Chopped’ where contestants get a box of surprise ingredients and must then use those ingredients (along with free rein of fridge and pantry) to create a tasty meal.  We were told the kids would get a box with a beef and a vegetable ingredient and we could bring spices from home.  And we had about 1 1/2 weeks to prepare, or at least try to wrap our heads around it.
Zach’s classmate hadn’t done a whole lot of cooking so I invited her over a few times to get her into the groove, so to speak, working on chopping vegetables (and garlic! Lots of garlic!) and coming up with a potential flavor palate that could be incorporated into a variety of beef cuts and veggie choices.  They decided Mexican/Southwest would be doable, and they practiced making chimichurri (hey, spices from home, parsley and cilantro are spices, no?) figuring ANY beef would be good with chimichurri on it.  Garlic and olive oil over sauteed veggies would be easy enough.But I was worried.  Because, you see, I subscribe to this pretty awesome organic produce delivery,Space Girl Organics, run by the awesome and amazing Lucinda, and going by the contents of the box I could tell that eggplant was in season.  Eggplant.  What on earth would the kids do if they had EGGPLANT in their box to cook with?  Aside from ratatouille and eggplant parmesan, I don’t even really know what to do with it myself.I googled ‘Mexican ratatouille’ and came up with some interesting recipes, but none of them even had eggplant in them.  So I told the kids they should try and make their OWN Mexican ratatouille, using some of the same flavors in the chimichurri, the garlic, etc, and see what happened.What happened was that there was no eggplant in the box of mandatory ingredients.  However, the kids loved that crazy Mexi-touille they had cooked so much, they decided to go for the OPTIONAL eggplant and add it to the mandatory zucchini and bell peppers that were in the box.  They wowed the judges with the recipe we invented so much that they won first prize.  So Because of Lucinda and Because of Alton Brown, my baby boy and his friend got a blue ribbon and a cash prize at the county fair.  Booyah! 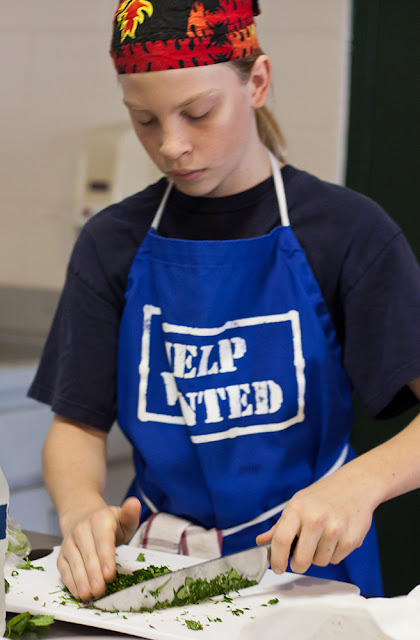 Here’s the rough recipe, you really should try it.  It made eggplant eaters out of two 12 year olds who had said “Ok, I’ll cook it but I won’t eat it!” 😉

Zach and Sage’s Mexi-touille
Ingredients are estimates, all amounts can be changed to suit your tastes 🙂

Trim the ends off the eggplant, then slice into 1/2 to 1″ rounds, and then cube it.  Throw the cubes into a colander and toss with the small handful of kosher salt.  Toss to coat all the pieces with salt and let it pull out some of the bitter juices.  I’m not sure if it’s necessary for this recipe, but I tried grilling eggplant once and I did NOT do a salt rest first, and it was NASTY. So rather than take any chances, we did it this way.  Let the eggplant rest in the colander for about 20 min or however long it takes to chop up all the other ingredients.  Then rinse it thoroughly with cold water and let the excess water drain.

Heat a skillet on medium high heat and drizzle a Tbsp or two of canola oil (better for higher heat than olive oil).  Toss the eggplant in to the heated oil and stir quickly to coat.  Eggplant will suck up that oil like a sponge so be quick.  Let the eggplant just start to brown and soften slightly, stirring frequently, then remove it to a plate.  Don’t worry about the brown bits on the skillet.  Reduce the heat to medium and drizzle in about a Tbsp of olive oil and add your onions, bell peppers and fresh chiles if using them.  Sprinkle a pinch of kosher salt into the mix and let them sweat for a few minutes.  Add the garlic and continue to gently sautee for a minute or two, then add the tomatoes, canned chiles, red pepper flakes and cumin seed.  If using fresh tomatoes, add about 1/4 to 1/2 cup of water for liquid.  Reduce heat to a simmer and cover, simmer for about 10-15 minutes.  Remove cover and add zucchini, give it about 5 minutes for the zucchini to start to soften, taste and adjust seasonings with salt and pepper, then add the eggplant back in, along with the fresh cilantro and a splash of lime juice.  Once the eggplant is heated through, remove from heat and sprinkle with queso fresco. 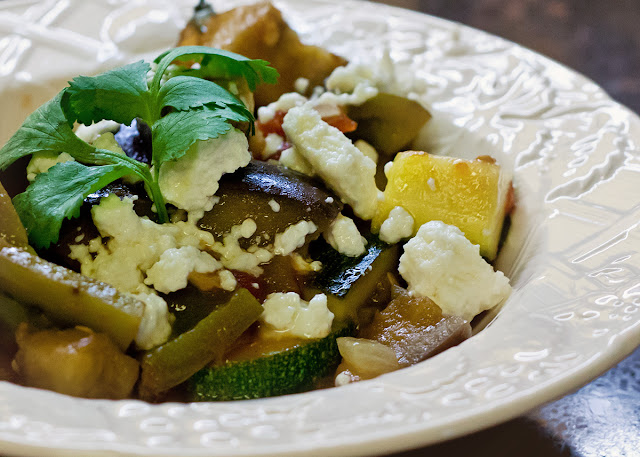 They also had ground sirloin in the basket, from which they made small slider sized burgers with queso fresco, cilantro, onion powder, garlic powder and salt and pepper, then drizzled with their fresh chimichurri after cooking.  Yummilicious.